April has been a very busy month for us.  We have events every weekend and not just one event.  We are double and triple booked most of the time.  We've had to decide what to attend and what to miss.  Yesterday my little sister got married.  I have TONS of pictures to edit.  Here is one of my little girl. 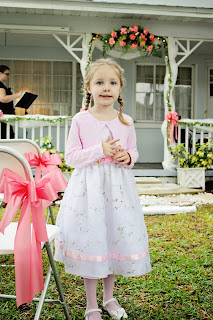 The wedding turned out great.  I still can't believe my little sister is married.  I don't think she's old enough yet.  She's still too little, yet she's 22.
Posted by Jennifer Jean at 12:08 AM No comments:

Email ThisBlogThis!Share to TwitterShare to FacebookShare to Pinterest
Labels: photography 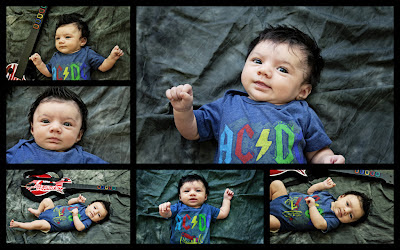 This little girl is a rocker!  She was two months old when I took these pictures of her.  She's such a cutie.
Posted by Jennifer Jean at 8:49 PM No comments:

Email ThisBlogThis!Share to TwitterShare to FacebookShare to Pinterest
Labels: photography

We bought butterfly nets from Target for a $1 and the kids set out to find bugs in the backyard. The only problem is they couldn't find any. They found an occasional lizards but they aren't really fast enough to catch them.

We ended up hiding little smurfs (thanks McDonald's) and several other small animal figurines and called them "bugs.". This is better for me anyway. I don't have to deal with live bugs. I decided to buy some real bugs (well real plastic bugs) to hide. 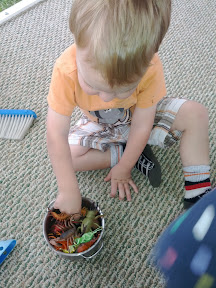 Daddy was mowing the yard so we settled in hiding them in the porch. 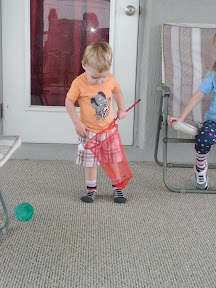 They love hiding and finding bugs. It's like Easter everyday, but with bugs not eggs. 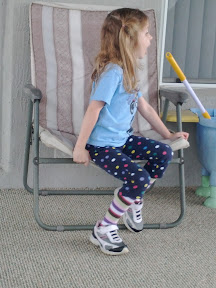 Sissy was yelling "hot" and "cold" to Bubby. Don't you just live her fashion sense? She gets that from her Daddy. Eh. Who are we kidding? She probably gets it from me.

Should I let her go to the birthday party in her awesome outfit? One of the birthday boys gave her the shirt so I may just let her. :p
Posted by Jennifer Jean at 11:48 AM No comments:

My husband needed a picture of himself for an article that is being written about him.  He was named the Air Force Association teacher of the year for our County.  I figured if he needed a picture then I may as well set everything up and to go ahead and try to get Easter pictures of my kids.  I like taking pictures, but I think I need to not take pictures of my own kids.  This is what happens just about every sing time...

Posted by Jennifer Jean at 9:54 PM No comments:

I've been feeling old lately and I blame it on my students.  I played the song "Reach" by Gloria Estefan and none of them have ever even heard it.  I looked up Gloria Estefan on Youtube and found the video of "Rhythm is Gonna get you" and played it for them.  Not one of them had ever heard of it.  They were shocked that I even listened to that stuff (because it is SO old).

My buddy that teaches next door had mentioned Whoopie Goldberg to a class.  They had no idea who she was talking about.  She started naming off different movies and shows that she's been on.  One wonderful student said "We don't know people of olden times!"

Later that week my daughter's friend said I sounded like her Grandma.  I'm sure she meant that I sounded wise.  Yeah..I'm sure that's what she meant.

Silly Kids!
Posted by Jennifer Jean at 8:32 PM No comments: