Well considering we've been here over an hour and this is all we've seen.... 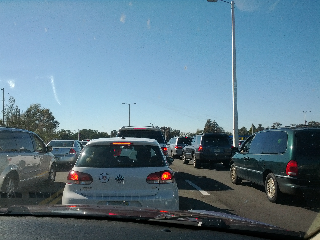 I'm thinking we should have gone to Sea World. Apparently, they cannot handle the traffic here. It's ridiculous. I can't tell you anything about the inside yet...but I do have a screaming, inconsolable 1yr old. The ticket lines in are terribly designed.

Here's the only parking ticket area. 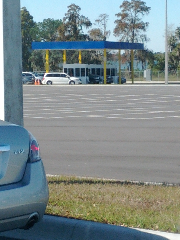 Well...it took a little while longer, but we made it inside got our yearly pass tickets and finally got into the park.  It was SO crowded!  We managed to ride the two story carousel.  Since we were the the first 5 in line for the next ride we thought for sure we'd get a horse on the top row.  I took Bubby and my husband took Sissy.  Of course she wanted to luxury of picking a horse.  They went around the one side and some lady was" holding" 5 horses for other people and by they time they came back around the others had been taken up.  After 2hrs to get in and by now it's nap time she was extra emotional and of course is upset and crying now.  Bubby refused to get on a horse (which I knew) so we were going to grab a bench upstairs, but when Sissy couldn't get a horse we went back downstairs and all the benches were then taken.  Great.  We watched.  Sissy cried until it got started and she calmed down.

We looked at the different lego scultpures of various places around the world.  Those were pretty neat and both kids were entertained.  They even had a building from my alma mater (Florida Southern College).  The Annie Pfeiffer by Frank Lloyd Wright.  My husband actually spotted it first, but I knew exactly what it was (I better after spending four years there). 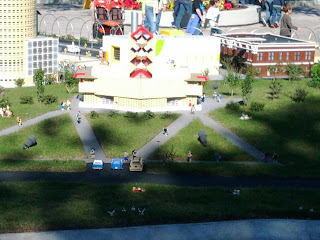 I'll have to post more pictures later, but this was the best part of our experience today.  The lines were crazy for everything. 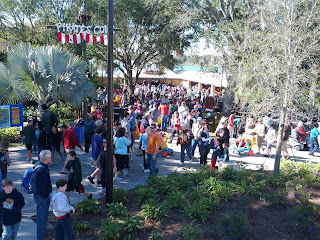 The building is a burger restuarant and many of those people are in line for a burger or lunch.  We decided it was just too much with two young kids that were already tired just trying to get in.

As we were leaving, a Legoland employee was asking a group in front of us if they were coming back today to see if they needed an arm stamp.  They said "no" and she said "I don't blame you."

They actually closed the park just after we got in because of high volume and meeting capacity.  Why did we pick today of all days to go? There were not very many smiling faces at all.  We overheard someone say they were there two weeks ago and it was empty.  Apparently, it is not always this way, but those of us going for the first time ever wouldn't know that.  I feel really bad for those that paid for a one day ticket.  I'm thankful we were able to walk away knowing we could come back when it's not so crazy.  We left, got a wonderful lunch, and went Disney mini golfing.