We had the opportunity to attend the new Medieval Times show with the kids.  We went for the twins 3rd Birthday so they were just at the age of needing a ticket, but barely.  It is pretty expensive for newly turned 3yr olds, but I was glad they had their own seat.  They would have been okay sitting on my lap and sharing on my plate, but we have two. 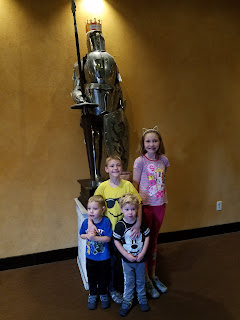 The food.  I was worried about the food because of my picky twins.  They are toddlers for sure.  It was ALL delicious to me.  Only one didn't eat much of it.  The older kids enjoyed most of it too.  It was way too much for them, but they ate it.  I do wish there were cheaper prices for the kids especially the 3-6 range and less food.  We had SO much chicken leftover.  Thankfully, we could take it home.  I basically used my plate to pile on the stuff I knew the kids wouldn't be able to eat.  The food we took home was never touched by the kids so it was like new take out. :P  The soup was great, the bread, potato, and corn too.  I didn't think the kids would like the soup.  3 out of 4 liked it.  I did sneak in a butter knife to cut the corn off the cob for my daughter with braces.  I knew she'd be upset if there was something she couldn't eat even if she isn't the biggest corn fan.  I also brought a smaller cup for the twins with a lid just to avoid spilling the big cups of water.   Our dessert was ice cream. They provided booster seats for the twins which was perfect to help them see better!  Just be sure to ask.

The show.  I'll admit that I missed some of the story line because...well...kids.  It has been many years since we had gone before.  I think it was over 5 years ago at the Myrtle Beach location.  It's been hard to get out much with the twins.   There is now a Queen instead of a King.  I won't spoil the story line, but there is still plenty of Knight fighting.  The horses and Knight's did great.  I may be a little biased, but our Knight, the Red Knight, was the best and he won too.  I'm not sure how I'd feel if ours was the "not so nice" Knight.  My daughter's favorite was the falcon flying over.  That and our Knight came up to the table in front of us so we got to see him up close. 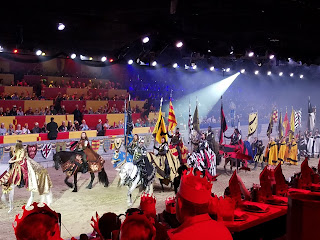 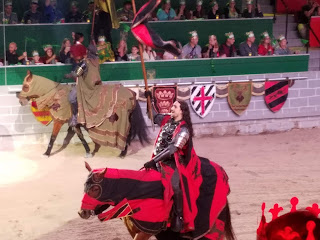 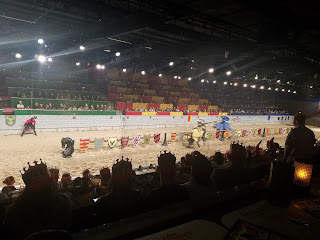 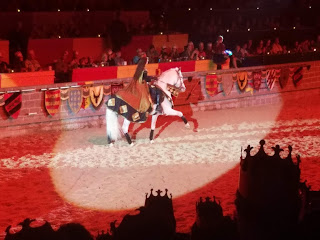 It was a great show.  I'm so glad we were able to go.  The twins had fun cheering.  I was worried they wouldn't sit through it well, but it kept them entertained.  I did tell one that they were pretending.  He can get more scared easily, but he was fine.  Sissy, 11, and Bubby, 8, enjoyed the show even more.  We were all cheering our hearts out.  There are additional things you can buy so be prepared if you want glowing and flashing swords etc.  We bought the $2 cheering flags for each kid.  It was a great experience for all of us.  If you are able to spend the money, I recommend trying it out.
Posted by Jennifer Jean at 2:19 PM

Email ThisBlogThis!Share to TwitterShare to FacebookShare to Pinterest
Labels: Review