We spent last weekend at Gaylord Palms in Orlando.  My husband is no longer a teacher, so he doesn't get summers off anymore.  He still works for the school board though and in the summer they work 10 hour days for 4 days a week.  He decided to take Thursday off and we headed to Gaylord Palms.  We haven't been there in almost 5 years. I almost forgot how gorgeous it is inside.  They also added their water park.  We had a wonderful time!

I forgot my good camera so all I had was our water camera which doesn't take the best pictures, but it at least it can get wet. 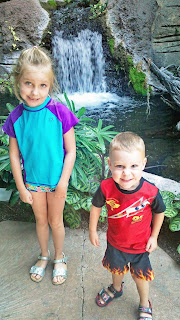 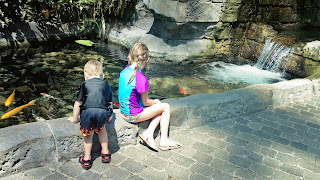 All throughout the hotel Bubby wanted to stop and see the "fishies."

It is definitely a family friendly hotel now.  The water park is awesome.  They put a lot of thought into it. 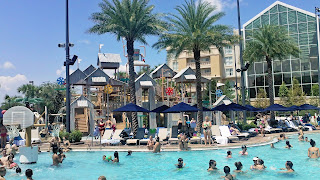 There is a large pool that only goes to 3.5 ft and had basket ball hoops in it.  We could never get to a ball though.  Bubby really wanted to play, but the older kids were really into their game and not very accepting of little ones.  There is also a huge screen at the end of the pool.  Every night they play a Dreamworks kids movie. 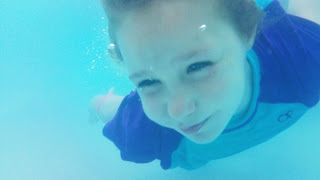 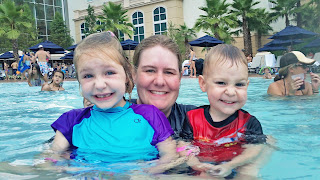 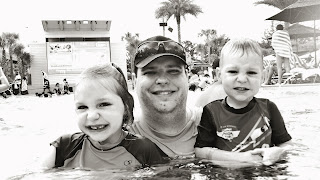 Enjoying some time in the "big" pool.  There is another pool for Adults 18+ only that is somewhat secluded from the kids area.

The splash/water park, aka Cypress Springs, had everything a kid could ask for.  There were four large slides.  Two for kids 36" and up and two taller ones for 40" and up.  There was also a tiny slide for the younger kids.   There is a huge bucket that drops 318 gallons of water every few minutes. 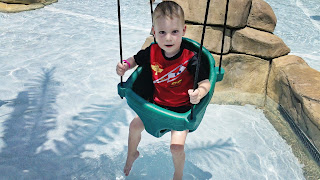 I thought this area with the swings was awesome.  There are 4 bounce seat/swings.  They are meant for 30lbs and under (Bubby is about 26lbs).  The water in this area is 6in deep so perfect for little bitty ones.   The little ones can swing in the swing with their feet in the water or bounce.  The seats are even different heights for different size children.

They had contest for the children almost every hour including hula hoping, limbo, and canon ball contest.
Every night they had a Madagascar Pool party.  30 minutes of dancing and singing with characters. 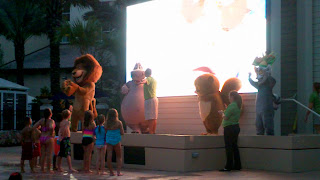 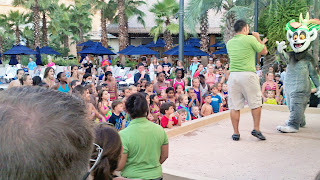 Saturday night was very busy and it got a little dangerous with kids diving for the free necklaces, Frisbees, and balls that were being thrown to the crowd.  The host tried to throw one to a lady with a cute little one and when it landed next to her feet the kids dove to get it and she fell.  Thankfully, her and the baby were okay.  He kindly handed a Frisbee to me because he could see Bubby crying.  We ended up with a necklace, 2 Frisbees (Jason got one in the pool), and a ball.  Sissy so kindly gave her frisbee to two sweet girls that didn't get anything.


After the awesome show and dancing with the characters, they played the movie.  We didn't stay out to watch it because it was getting too late.  It would have been awesome if they were able to play the movie through a hotel channel, so the kid could watch it in bed.  I know there are more licensing fees to do that though.

They also had character meet and greets throughout the hotel at night.  We met Shrek, Po (Kung Fu Panda), and King Julian (Madagascar). 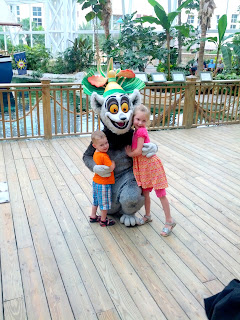 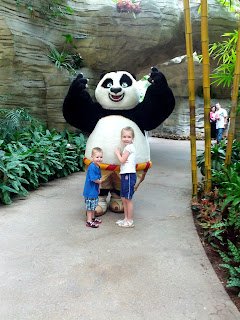 Honestly, I wasn't as excited to go to Gaylord as my husband was.  I wanted to go to the beach, but I'm glad we came.  They have a $20 a night resort fee and $18 a day parking and I thought it was too expensive but the Cypress Springs Water park made it worth it.  I know that we'll be going back.

I did have some issues with the bill though.  They charged me almost two times.  The 2nd charge was a random amount and no one could figure out where it came from.  Thankfully, they fixed it.  I have a good feeling we will be staying here again...when we get some more money.